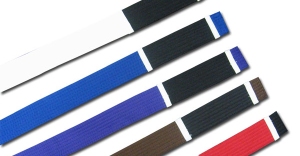 Belt rank and/or belt grading in Brazilian Jiu-Jitsu may differ along some lines. Commonly the belt color and rank scheme goes as follows: white, blue, purple, brown, and black. Black/Red (coral) and Red Belts are nothing you have to be immediately concerned about; they are handed out many years after you receive your black belt. Some schools offer other belts in between white and blue, depending on their particular program’s criteria or at the instructor’s discretion. Kids’ belt colors differ and you will have to see exactly what our school’s kids’ curriculum offers.

In between each color of belt levels are what are commonly called “stripes.” Stripes are usually a piece of tape your instructor will give out from time to time by wrapping it around the width of your belt. You can get one or a few at a time depending on your skill level and your instructor’s discretion, or the criteria of your specific program. Four stripes are typically needed before you can advance to the next level belt level.

A common question is “How many years does it take to get a black belt?” First, there are different ways to test for each belt depending on your program; formal testing is becoming more commonplace as the sport continues to grow. A formal test will consist of a set of movements or drills that you may need to perform to near perfection. A test may consist of sparring with your fellow classmates or both sparring and demonstrating techniques. As you move through the ranks, standards often rise.

Many say a white belt is a like a newborn to the sport. A white belt may be developing body awareness, remembering names of positions, recognizing positions, finding balance within positions, and developing survival skills.

A blue belt starts to get a more comfortable handle on the positions and should be able to do better than the majority of white belts while sparring, provided they are of a similar weight range. Technical ability should increase and overtake natural instincts. A well-seasoned blue belt should be able to handle a brand new beginner quite easily.

When you reach the purple belt stage, you should be at a point where you know and understand the positions and techniques and have come to your own understandings to develop your own “game.” You should be able to teach basic techniques efficiently to other students. A purple belt will typically demonstrate a recognizable superiority to white belts and most newer blue belts.

Come down to Arashi Do and try out one of our great Brazilian programs like Fundamental BJJ, Women’s Only BJJ or Children’s BJJ for ages 4-7 and 8-14.  All those and you get a 30 DAY FREE TRIAL!  What are you waiting for?  Call or text us at 780-220-5425 or email us at myackulic@ArashiDo.com